The Cat In the Woods

Written and illustrated by Adrienne Potter 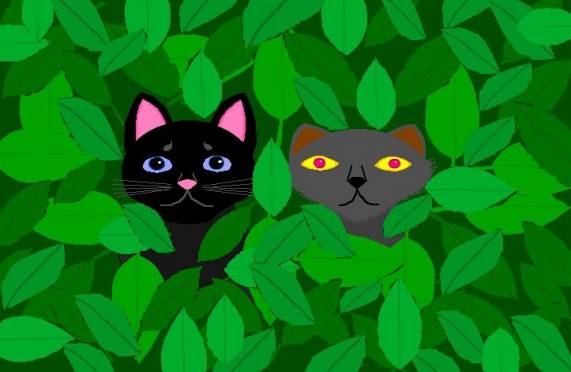 This is the story of a cat who lived in a wild, wild, wood. He always stayed in the bushes and was afraid to come out for he had seen the other animals eat each other, and it did not look pleasant to be eaten. One day the cat found himself next to another animal who was sitting and watching like he was. It was a sleek mongoose, about his same size. The mongoose looked him over.

"Oh," said the cat. "I have seen many animals eat each other up."

"Yes," said the mongoose, "but they do not eat their friends--only their prey. That is the law of nature." The cat thought about that. He did not know that there were laws about such things.

"I have seen you eat a mouse," continued the mongoose. "Was the mouse your friend?"

"Why was it your enemy? What did it do to you?" questioned the mongoose.

"Why nothing, of course," he answered. "I have simply always eaten mice, ever since I was young."

"Ah, yes," said the mongoose, "and I have always eaten snakes."

"Is the snake your enemy?" asked the cat.

"That is very honorable," said the cat. "I suppose that I am also protecting the children from the mice."

"Indeed," answered the mongoose. And they both felt very satisfied with themselves.

A hyena passing by heard their conversation. "So you think yourselves heroes because you eat?" he laughed. The cat and mongoose looked at each other. Was the hyena going to eat them? Quickly they scrambled up a tree, out of reach, and looked down at him from a fat branch. "Do you want to eat us?" they asked together.

"No," he laughed again. "I only eat what the lioness leaves for me. Therefore, everyone is my friend."

"But the lioness eats everyone," countered the mongoose wisely.

"No," answered the hyena as he licked his paws. "Only old lionesses eat cats and mongooses, so you see, I can be your friend."

"Why does the lion not eat you?" asked the cat curiously. "Because I always stay in a pack and the lion fears the pack," was the hyena's reply.

While they were having this conversation it began to rain and soon many animals had taken cover under the trees. The cat looked around nervously. He had never had so many animals close to him. "Will they eat us?" he asked the mongoose. "No," he replied. "Now is not the time to eat. Now is the time to watch nature perform its wonders." And they watched the lightening shoot down from the sky and listened as the thunder shook the leaves. When it was over the sun came out and all the animals returned to their usual business.

The cat and the mongoose did not see it, but there was snake slowly slithering up behind them. It was a cobra who wanted to eat a mouse that was hiding near the cat, under a leaf. Sensing something, the mongoose suddenly froze. The cat looked around, startled, and in that instant the cobra struck. Quick as a flash, before he even reached his victim, the mongoose had him by the throat. The cat shot up to a higher branch and watched the fight below. The snake defended itself bravely as the mongoose struck again and again. The mouse was frozen in fear and nearly fainted. When the mongoose had completed its work the mouse cried out, "Thank-you sir! You saved my life!"

"Oh, it was nothing," said the mongoose casually as he licked himself clean. "Just doing my duty." But the mouse cried as he ran from the scene, "I will tell all my friends of your bravery."

"Bravery, Ha!" laughed the hyena. "Any mongoose can kill a snake!"

"Oh, but I did fight well," answered the mongoose, "More bravely than you have ever fought." With that the hyena slunk away, as was his manner.

The cat had a puzzled look on his face. "I don't understand," he said. "I kill mice, and you kill snakes, and snakes kill mice and cats and mongooses. But you saved the mouse, and I suppose you would have saved me were it not for the mouse. And now the mouse is your friend."

"Such is the universe," answered the mongoose. "Circles linked with other circles, until all is connected."

"You are very wise," said the cat. "No, I am just saying what I know," replied the mongoose, and he and the cat curled up and had a nice nap together, each facing the other way, in case an animal wanted to eat them.